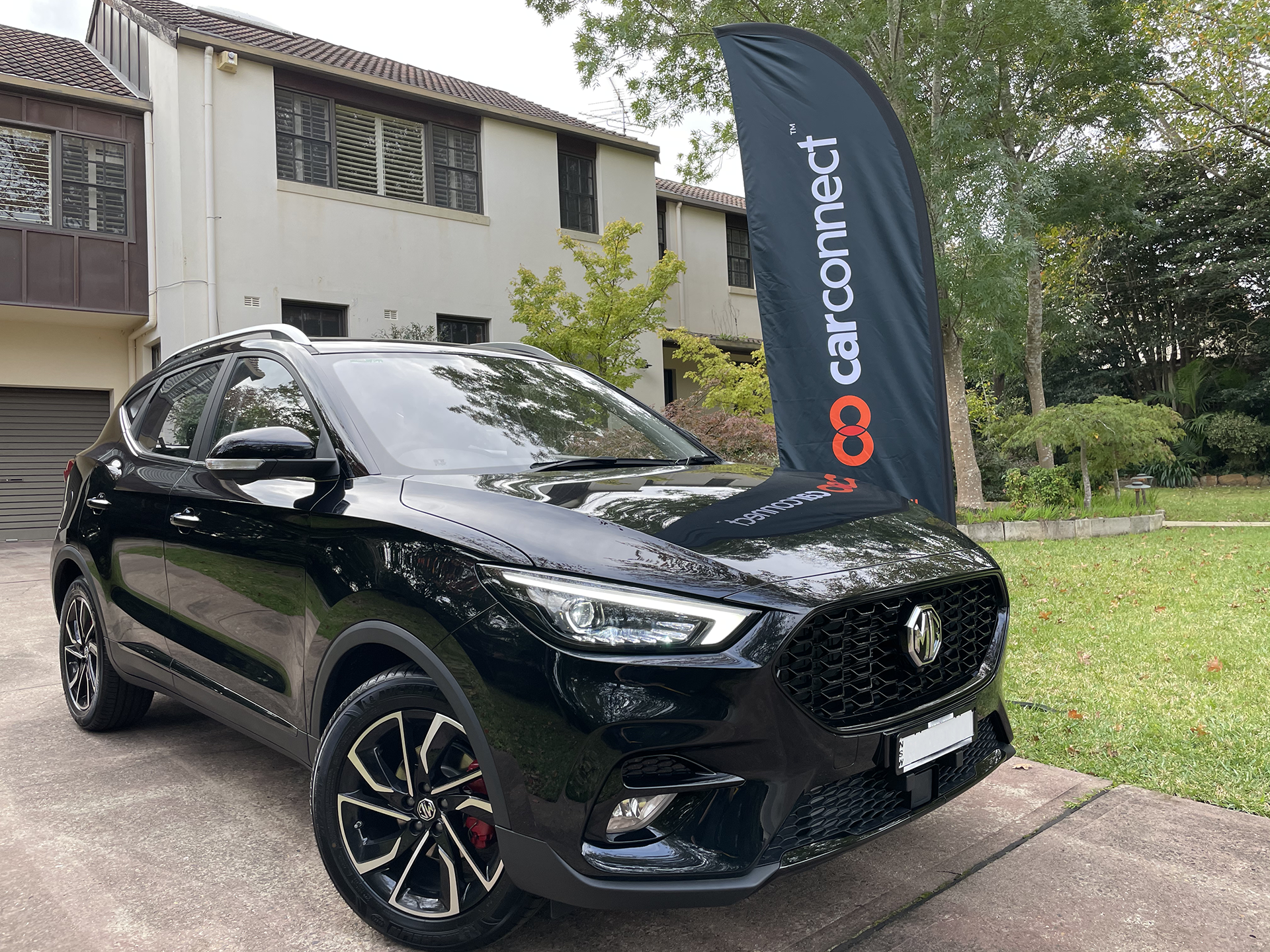 Within the range of options in the very busy small-SUV segment in Australia, the 2021 MG ZST Essence certainly looks complete.

The styling is rather appealing, and there are no oddball touches or out-there flourishes. It’s a people-pleaser.

Perhaps the most pleasing aspect is the price. The top-spec ZST Essence you see here is sharply priced from $32,990 drive-away, or with the Brighton Blue metallic paint (or available Sterling Silver) is just $500 extra.

In a segment where a high-spec Mitsubishi Eclipse Cross, Kia Seltos or Hyundai Kona can push into $40,000 territory and up, it makes the ZST look good. Those more premium-priced options do come with all-wheel drive, though, which is something the MG doesn’t have.

Still, with a 1.3-litre turbocharged three-cylinder engine – and 115kW of power and 230Nm of torque – the MG manages to outgun (on paper at least) cars like the Mitsubishi ASX – which has 8kW more power, but 7Nm less torque from a 2.4-litre non-turbo engine in an almost-match.

The Honda HR-V, 2.0-litre Kia Seltos and Hyundai Kona, Nissan Qashqai, and Suzuki Vitara might all wear better-known badges, but in each instance something with similar specifications asks for slightly more money while delivering slightly less theoretical performance.

Once you jump in, things still look good at first glance, but poke around and some of that shine wears off.

The driver’s seat is a touch too high in its lowest setting, and the steering wheel a touch low. The driving position is close but not quite where you want it, and a lack of reach adjustment for the steering (it’s tilt only) means the wheel is a long way away.

The seats themselves are comfy, with a top layer of nice spongy padding covered in an unglamourous-sounding mix of polyurethane and polyvinyl chloride (PVC) – at least MG calls it what it is and hasn't created a misleading name for faux leather. The driver’s seat has electric adjustment, which is a nice touch.

You’ll find the seat does tend to rock a little as you move about – not alarmingly so, just enough to stop short of the feeling of quality you might be chasing.

The huge 10.1-inch infotainment screen grabs attention with its brightly coloured layout, and rather than a deep-dive of complex menus, the layout is about as simple as you’ll find.

There’s a row of supporting keys to control basic air-con functions too. While the system looks like an automatic climate-control system, it isn’t – you just slide from blue to red for the approximate temp you want, and there’s no set-and-forget auto function.

Occasionally, the hard keys didn't register a response from the screen, so tapping away to adjust the fan doesn’t show anything, but the system itself does change. That means you can at times bump the temp up or down more than you intended.

While the simplicity of the infotainment system is no bad thing, the inclusion of wired Apple CarPlay and Android Auto probably matters the most. With your phone plugged in, there’s not much cause to use the native system, which does at least include standard satellite navigation.

MG goes in hard with USB ports. There are two up front, two in the rear, and even one up next to the rear-view mirror, perfectly placed to power a dash cam.

Interior storage feels a little scale-sized. There’s a receptacle under the centre stack, but it’s not quite big enough to cradle a smartphone. The cupholders will take a can, but big takeaway cups are a tight squeeze. Both the centre console and the glovebox are a little undersized too.

Nothing feels flimsy. There’s no hint of fragility, and all the bits you’d regularly touch, be they switches or door pulls, all operate with a pleasing heft and accuracy. It’s all very encouraging. For a veneer of luxe, there are plenty of soft-touch surfaces too.

There’s also a standard panoramic sunroof overhead. Just the thing for treating rear passengers to cityscape views and tree-lined passes. Be warned, though, the fine mesh blind does little to keep heat and sunlight out.

Rear-seat space is quite decent. There’s a good amount of head and leg room, and even the middle seat isn’t a penalty spot. Without being a very large car on the outside, the ZST is quite a useful one on the inside, if you’re likely to call the rear seat into action often.

The instrumentation ahead of the driver uses a digital interface, but can’t be changed or configured. It’s possible to cycle through trip computer screens, but each time you restart, the cluster defaults to the MG Pilot screen rather than the last selected display.

Along with the digital speedo readout, there’s a segmented speed display that gives at-a-glance confirmation of your current speed – except there’s a non-linear relationship between segments and speed, which can take some getting used to.

I quite like the non-reflective coating on the instrument cluster. It’s great for reducing glare and reflections (something that really bothers me in some cars), but gives the gauges a Days Of Our Lives soft-focus effect.

The boot is also quite deep, and deeper still beneath the stowable sub-floor. The only real problem that creates is a load lip to lift over, instead of a flush opening.

Boot space measures 359L to the cargo cover, or the rear seats can be folded forward with a 60:40 split for up to 1187L to the window line – but with the floor dropped down, a staggered floor rather than a flat one.

Take to the road and the ZST doesn't feel like it leads the small-SUV pack, but nor does it fall behind in any significant way.

As you ease on the accelerator it’s willing and happy to run about town. There are times where the little turbo engine can suffer some lag – a delay between pushing the pedal and the engine catching up – but it doesn’t take too long to get used to.

While the engine outputs are decent, this is no sports car in disguise. For general-duty runs to and from work, and a jaunt or two out of town on the weekend, the ZST really doesn’t provide any real cause for complaint.

Official fuel consumption is listed as 7.1 litres per 100km. On test, covering a fairly even mix of heavy city and open-road driving, the ZST settled on 8.7L/100km.

Another little quirk to adjust to is the six-speed automatic’s pause and stumble into first gear from a standstill, much like the effect you get from a dual-clutch automatic. The same sensation can be found in some Peugeot and Citroen small cars and SUVs, which use a version of the same transmission.

The steering isn’t pinpoint sharp either, but nor is it heavy or cumbersome.

The ride might not be perfect, but once again it isn’t actually bad. It’s stable on the road, threads through corners without complaint, but could perhaps be just a touch more settled, with a little finishing required.

So much of the MG experience feels a bit like where brands including Hyundai and Kia were 10 or 15 years ago. Close to the mainstream average, but just missing something here or there. Nothing major, but the final finish could be tweaked in some areas.

Standard equipment is the ZST’s drawcard more so than engineering, of course. Even the base model comes with keyless entry, push-button start, a decent quality 360-degree camera, 17-inch alloys, LED headlights and tail-lights, plus auto lights and wipers.

The ZST Essence adds in details like the digital instruments, seat heating, and powered driver’s seat. It’s a decent equipment list, whereas some rivals aren’t ticking all those boxes at the same $33K price mark.

MG Pilot branding applied to the safety equipment, one of the major differences between the ZS and ZST, adds in safety and assist tech like forward collision warning and autonomous emergency braking, lane-departure warning, blind spot and rear-cross alert, adaptive cruise control with traffic jam assist and intelligent speed recognition, plus there are six airbags.

It’s a decent list, but MG Pilot chips in a lot. The system chimes a hell of a lot as it picks up and loses lane markings. The problem here is that rather than put up with it, many owners may simply deactivate it to save the frustration.

Under ANCAP’s rating system, the ZST carries the same four-star score as the ZS did from 2017. That’s despite the addition of AEB and lane-departure warning not present initially, and structural changes that MG claims increase front-end rigidity by 50 per cent.

The ZST also comes with one of the better warranty terms available, at seven years with no kilometre limit for private buyers, matching Kia, and ahead of Honda and Hyundai, but not a match for Mitsubishi's conditional 10-year term. Service pricing is over the first five years is set at $241, $283, $291, $448 and $241 for each of the first five visits at 12-month or 10,000km intervals for a total of $1504.

Try as I might to approach the MG ZST with an open mind, there was still some skepticism. While the MG badge is old, the current generation of cars has almost zero connection to earlier generations, with the brand having essentially restarted from scratch within the last decade under new owners.

Much to my surprise, the ZST felt far more accomplished and complete than I’d expected. Small gripes about the simplicity of the native infotainment and persistence of the MG Pilot systems didn’t spoil the experience entirely.

Ride comfort, equipment, responsiveness, space and versatility all kept pace with the main players in the small-SUV class. As for value, MG largely surpasses its competitors, and does so without feeling flimsy or cheap. 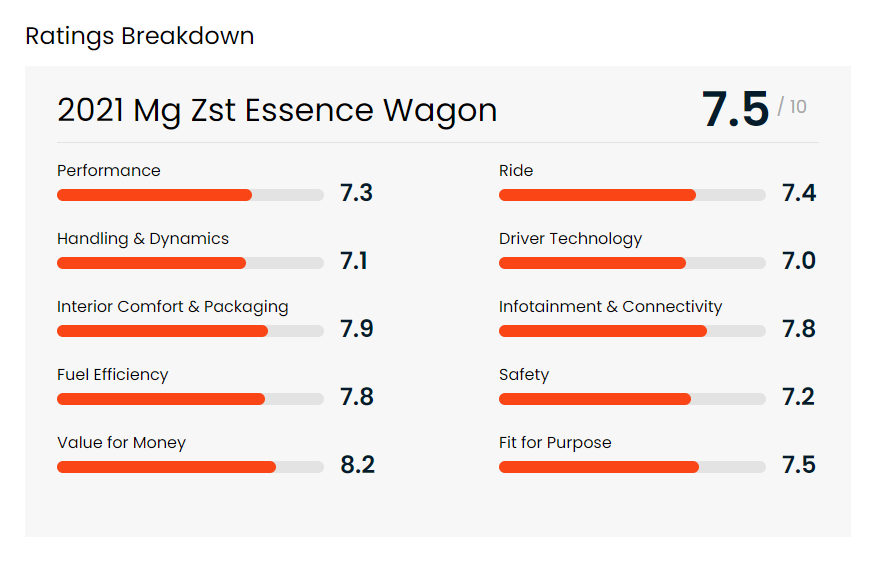 This article has been republished with approval from its original source and author at drive.com.au

Let us help you upgrade and get driving sooner

Ready to trade in your current car and upgrade to something new? Either way, we're here to help.

We’ve redefined the car buying process to make it simple, stress and haggle free. We'll find you a great deal from our Australia wide dealer network to ensure you get a competitive price.

Call 1300 880 008 to chat with us and learn more about what we can do for you or get the new car buying process started today.