Unless you’ve got the hookup with a bare-bones company ute as your daily - the single cab 4x2 manual rocking a tray and the most gutless engine in the model range - you’re probably after something that drives and looks tough as nails.

And rocking up to work in a brand-spanking new truck chock-full of all the gear that gives it even more of a mean look? There aren’t many better feelings. But really, who’s got the time to piss-fart around sorting out all the aftermarket stuff and waiting to get it installed?

If you want to minimise the time it takes to get your bum behind the wheel of your geared-up new ute while also having peace of mind from having everything factory-fitted by the manufacturer, we’ve done the research to hopefully make your decision easier when it comes time to pick out your new truck.

5 awesome utes with all the bells and whistles

Righto, now we know a few of the main things to look out for, let’s get into five trucks that don’t need a hint of salt or pepper before they’re delivered to your door. Which means you can just hop in and take them directly to the job site - or off on a 4WD weekend.  These bad boys will all arrive exactly as a truck should arrive; ready and raring to take you to wherever the hell you want to go.

With a 3.0-litre turbo diesel producing 140kW of power at 3600rpm and 450Nm of torque at the same revs, it’s easy to understand why people say its engine is a huge strength point and produces what feels like effortless power, especially when you’re maxing out its 970kg payload. It also delivers heaps of comfort in the cabin with leather accented seats, solid infotainment system, and lots of safety tech. Kinda easy to see why it won Drive Car of the Year 2021’s Best Dual Cab Ute category, isn’t it?

And there are a bunch of genuine factory accessories you can chuck straight onto the X-TERRAIN, too:

So how much does it all cost? Well, we added what we reckon is all the must-have gear (pretty much everything except the headlight protectors) and the whole kit and caboodle measured up at a smidge under $78k driveaway. Which is pretty bloody good considering there’s nothing that needs adding except maybe a CB if you’re heading out bush. Yeah, yeah. We didn’t put the Ranger Raptor X here. But there’s a good reason - it’s what’s known as a ‘special edition’ Ranger, which means stock is limited (same with the FX4 Max). Plus, because the gear comes as standard you’re not free to pick and choose as you want, which we reckon is a bit of a minus when you want to fully customise your ride.

The WILDTRAK is an incredibly formidable beast in the dual cab ute market, and has been for a long time now. These days, you have the option of either a 2.0-litre bi-turbo diesel engine with 10-speed auto or 3.2-litre turbo diesel with 6-speed auto/manual variants.

The bi-turbo produces 157kW/500Nm while the single turbo offers 147kW/470Nm, but separate from the mechanics they’re essentially the same vehicle in terms of looks and tech/features. The Ranger line took out carsales’ Best Dual Cab 4x4 Ute award in 2021, and the WILDTRAK specifically won the 2019 Adventure Car of the Year from carsguide. One slight concern is the payload which falls under a tonne at 920 kilos, but if that isn’t an issue it’s a damn good choice of truck.

Okay, now you’re pretty spoiled when it comes to genuine accessories you can add to the WILDTRAK: 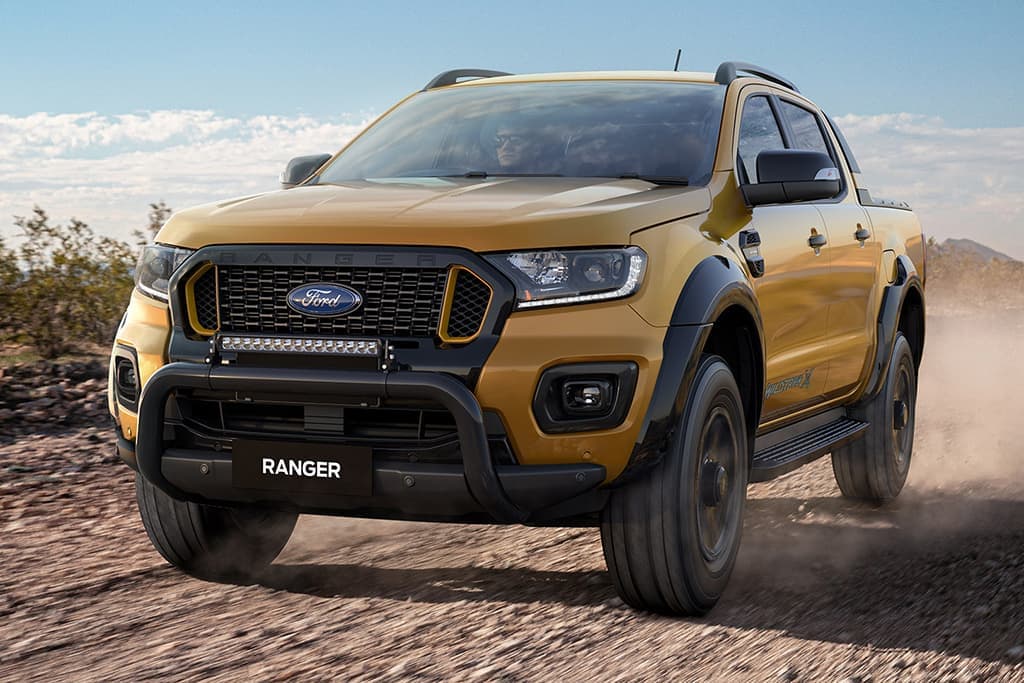 Okie dokes, now onto Nissan’s entry in the toughest trucks department, the PRO-4X.

Like all the other utes in this lineup, it’s got a 5-star ANCAP rating (we wouldn’t bother listing one that didn’t have it) as well as a one-tonne payload rating minimum. You’ll have more space in the back with an increased load volume against previous years’ models, and an easy time hauling whatever you’ve got back there via its 2.3-litr twin-turbo diesel engine (spitting out 140kW and 450Nm of torque).

The PRO-4X comes equipped with 17-inch black rims sporting Yokohama Geolander AT tyres, double-tube steel sports bar in black, wheel arch flares, roof rails as well as blacked-out grille, door handles, side steps and mirrors. Inside, you’ll find leather-accented seats with contrast stitching and special PRO-4X mats. And all of these awesome features are installed as standard from the factory. The ever-popular Toyota HiLux wouldn’t ever find itself out of a list of utes in any kind of fashion, would it? And it’s of course made it to this one with the Rugged X, an it-and-a-bit option that really looks as if you could take it directly from when we drop it off at your place to some of the toughest 4WD tracks in our beautiful sun-blessed country and it’d conquer it with zero problems.

The Rugged X is powered by a 2.8-litre four-cylinder turbo diesel engine, with a power output of 150kW at 3400rpm and delivering 500Nm of torque between 1600 and 2600 revs. It’s a part-time four-wheel-drive with a low-range setting, and runs a 6-speed auto transmission.

So what are you getting with this legit-looking ‘Lux? Leather-accented, electric heated seats? Check. Nine-speaker JBL sound system? Sure. All the latest safety/driver assist tech? Uh-huh. Top-tier infotainment system? Yup. Superb level of comfort throughout the entire cab? You bet.

But what about what’s happening outside? Right off the bat, you’ll be getting a tough-looking steel front bumper with inbuilt light bar and room for a winch, a snorkel, bash plate, wheel arch flares, easy-to-access recovery points, black sports bar from hell, and a tow bar/ball and tongue all as standard. However, loading it up with all the gear means its payload sits at 748kg which could be an issue for some.

Overall, with all these inclusions it’s pretty damn good being priced from $75,485 driveaway. 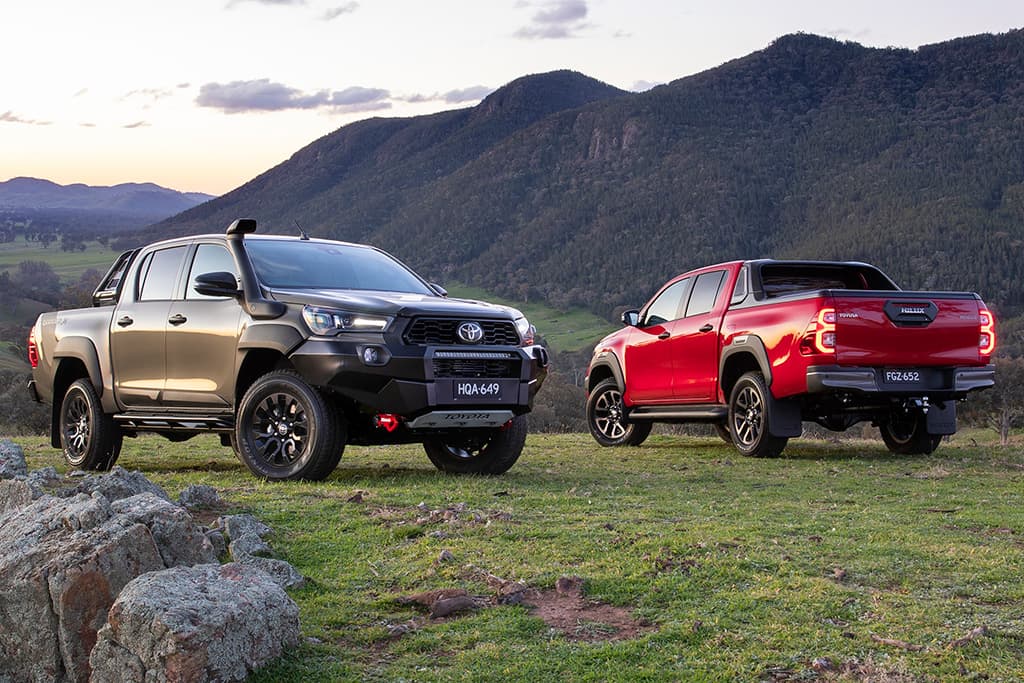 There’s definitely a pattern forming here, with the names of most of these utes (all bar the Ranger) including an ‘X’ somewhere, isn’t there?

First and foremost, we thought it would be pretty important to talk about this range-topper’s price - it’s $42,490 driveaway. Which is a damn sight less than the other options we’ve included in this list, isn’t it?

So what are you getting for such a low price?

Well, under the bonnet is a 2.0-litre, four-cylinder single turbo diesel providing 120kW and 400Nm (a fair step down from its competitors) working with an 8-speed automatic gearbox. It’s a full-time 4WD and includes a low range option, as well as over a tonne payload (1050kg). It also includes leather seats which mostly provide a comfortable ride, and an infotainment system which offers wired Android Auto and Apple CarPlay.

In terms of the accessories you can fit it out with from the factory, well, there aren’t any. Which does mean you’ll need to take it somewhere after delivery to get everything fitted.

The major selling point of the Cannon X is indeed its incredibly low price. So if budget is at the top of your list of what’s important, it’s a decent and quite capable vehicle. 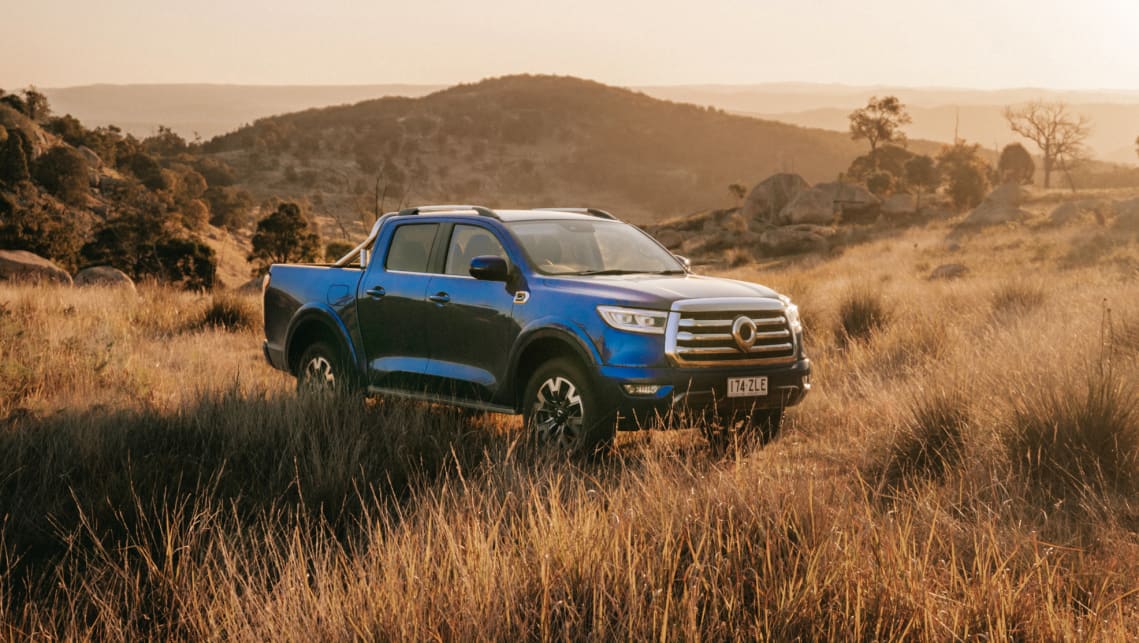 Sorting through all the crap during what many see as the ‘normal’ buying process (negotiating, paperwork, etc.) can involve a heck of a lot of stuffing around and take what seems like an eternity. Hell, you might not even be able to drive the bloody thing off the lot that day!

But with carconnect, getting behind the wheel of your new beast of a truck doesn’t have to take a stupid amount of time. All you need to do is search for the car you’re after and leave us some info - that’s it. Then we’ll do all the legwork and come back to you with the hottest prices from dealers all over Australia for you to choose between. Once that’s sorted, we’ll even arrange for it to be delivered straight to your home or work. Zero hassles, zero stresses.

And if you’ve got a car you’re wanting to sell, we’ve got you covered there as well - our team handles pretty much everything and makes sure you get top dollar for your old car.