While Australian punters are forming a long and orderly queue out the front of Isuzu dealerships, there’s less pressure for the closely related Mazda BT-50. In fact, Mazda tells us there is a good supply of new utes in many of its dealerships around the country.

So, is it the smarter option for the Aussie ute buyer? We’re behind the wheel of a 2021 Mazda BT-50 GT to find out, and this time we’re going to spend some time off-road.

Once bedfellows with Ford’s Ranger, the BT-50 now uses Isuzu’s new design as a platform for its own four-wheel-drive ute. And besides sheetmetal changes and a few minor interior tweaks, it’s mechanically identical to the Isuzu under the skin.

This jump in platform means the 2021 BT-50 takes a rare backward step in peak power and torque, as well as engine capacity and cylinder count. 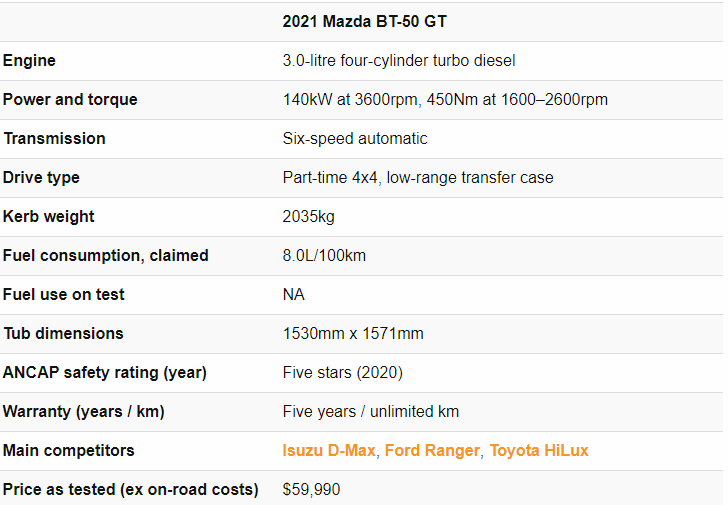 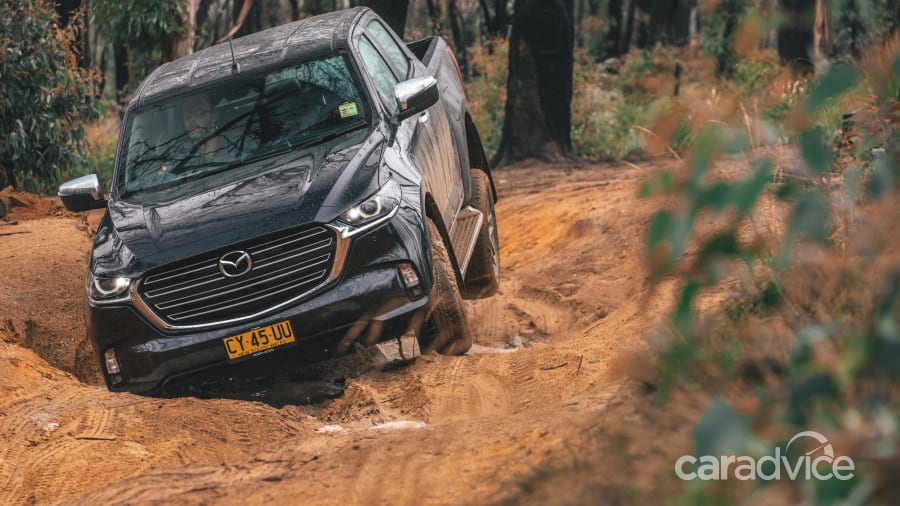 The 3.0-litre, four-cylinder diesel Isuzu engine makes 140kW at 3600rpm and 450Nm at 1600–2600rpm, 7kW and 20Nm down on the previous 3.2-litre five-cylinder. The characteristic warble has gone, but this new powertrain is quite refined for a low-revving, load-lugging diesel donk.

That peak torque figure is now available slightly lower and higher in the rev range than the previous motor. This yields a driving experience that doesn’t have the same surging go-forward it once did, but is flexible and quick enough for the application.

While you can also opt for a manual for three grand less, the six-speed automatic transmission we have is a peach, whose unhurried and smooth nature seems to match the engine perfectly. Behind that sits a two-speed transfer case carrying a segment-typical 2.482:1 reduction ratio and part-time 4x4 engagement.

The crawl ratio works out to be 33:1, which isn’t incredible, although opting for a manual transmission will improve this number to 45:1 thanks to a much lower first-gear ratio.

Combine easy throttle control and a malleable automatic gearbox with a locking rear differential, and the Mazda is a good off-roader in its standard form. Although, the inclusion of side steps in this GT specification does markedly reduce off-road clearance around the sills. If it were me, I'd be unbolting these and stowing them away before inevitable damage, and perhaps replacing them with something much sturdier.

Ground clearance is listed at 240mm, with thin steel bash plates mounted underneath for when that number is outstripped. Other clearance figures are mostly par for the course in this segment: 30.4° approach, 23.8° rampover and 24.2° departure angles are all typical, and enough to get you into enough tricky situations with smart manoeuvring.

It’s not the same marked improvement that the Isuzu gets between generations, mostly because the previous-generation BT-50 already had a locking rear differential and good clearance at its disposal.

Bridgestone Dueler rubber, in a 265/60R18 size, is mounted onto some smart-looking optional wheels in our case, and offers off-road performance that is good enough for a pass mark, but can be easily improved upon with some aftermarket tyres.

The slightly shorter wheelbase – 3125mm, down from 3220mm – should theoretically help with off-road clearance and agility. 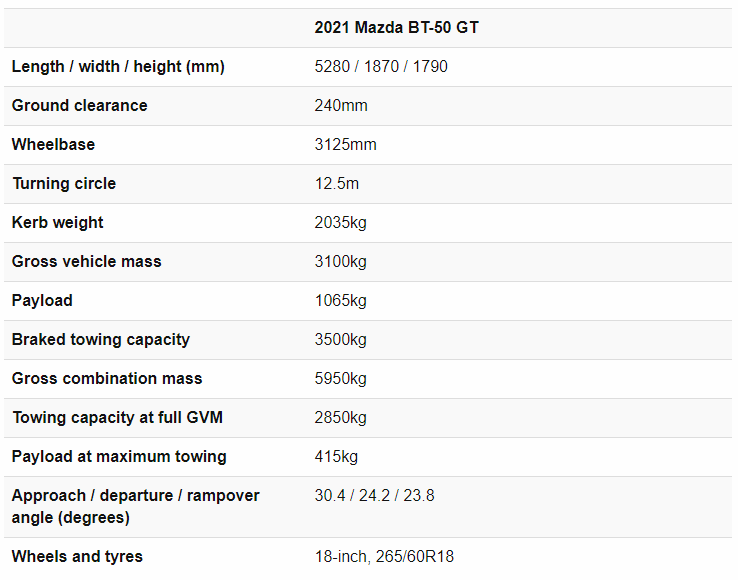 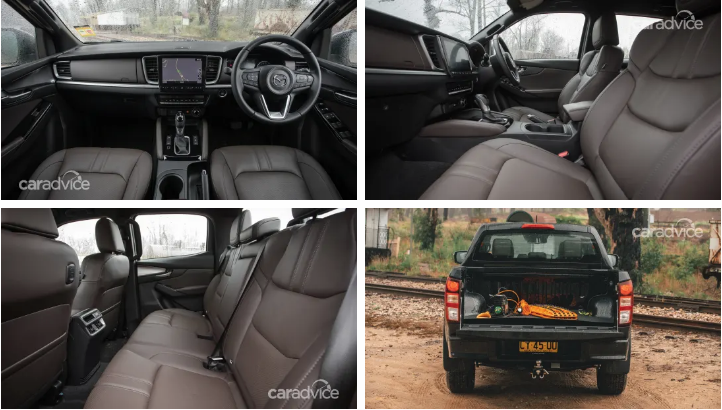 Although not really a fault of the vehicle so much as the driver, we did have some trouble coming off the track after slipping and sliding sideways a bit. Watch the video to check out the details, but after a short recovery the Mazda came out unscathed.

Where this new BT-50 benefits from mostly is the updated suite of advanced safety and convenience technology. Instead of having an infotainment display that looked more Autobarn than OEM, the new 9.0-inch display looks and feels much more modern and integrated. Apple CarPlay and Android Auto are all accounted for, as is digital radio and native navigation (for GT and XTR specs only).

General comfort is well accounted for also, especially in GT specification. Brown leather upholstery sets the GT apart from other BT-50s, and heated front seats are something unique against the D-Max. Tilt and reach through the steering column and your basic seat adjustments (electric for the driver) mean you can get comfortable behind the wheel for long stints without too much trouble. 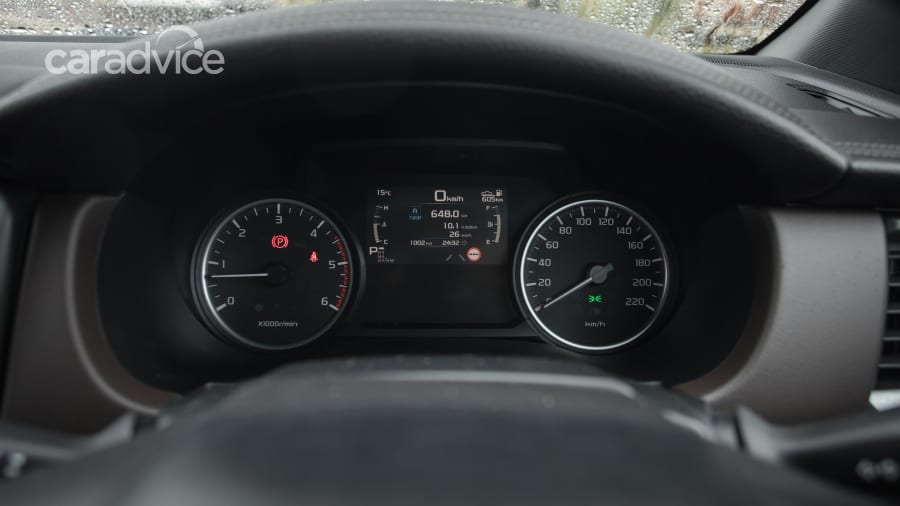 Although the wheelbase has shrunk, second-row space remains good and keeps the Mazda as one of the better choices for family buyers.

The Mazda also gets some additional soft-touch materials around the transmission tunnel in GT guise, along with leather wrapping on the steering wheel and shifter. Compared to the D-Max, it misses out on additional pop-out cupholders, as well as the lidded storage compartment atop the dashboard. So, you could argue that the D-Max is the better prospect in terms of practicality. Otherwise, it’s splitting hairs between the two.

And being identical to the D-Max under the skin – with Mazda admitting to not touching a thing mechanically – driving the BT-50 doesn’t yield any surprises good or otherwise. That’s not a bad thing really. We’ve always come away with positive feedback after driving the new D-Max, and this Mazda is no different. Although, for the breed, the jump up isn’t as stark.

It’s worth noting here that both the Ford Ranger and Mazda BT-50 were mechanically and electronically very similar back when they launched in 2011. But continuous development and updates by the Blue Oval left a stark difference between the two by the time 2019 rolled around.

However, the Australian-developed Ford T6 platform was a good one, and stood the test of time quite well.

So, while there isn’t as big an improvement in terms of the ride quality, refinement or off-road performance, the Isuzu’s base has served to make the 2021 Mazda BT-50 a solid offering filled with all of the requisite technology, safety and improvements to make this new BT-50 compelling and contemporary.

And it’s the same story off-road. While it doesn’t change any games or set anything on fire, there is plenty enough capability for a standard vehicle, and lots of room for improvement through modification.

It doesn't carry the same drive-away value as an Isuzu D-Max X-Terrain, and you need to remember that the tub is bare. However, unlike the Isuzu, Mazda tells us there is stock available in showrooms. 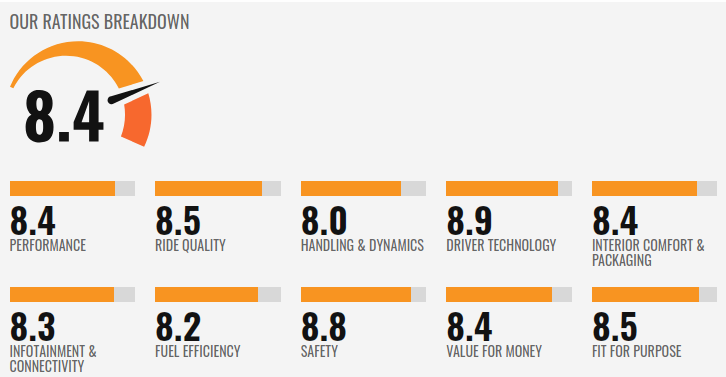 This article has been republished with approval from its original source and author at caradvice.com.au.

Ready to trade in your current car and upgrade to something new? Either way, we're here to help. We’ve redefined the car buying process to make it simple, stress and haggle free. We'll find you a great deal from our Australia wide dealer network to ensure you get a competitive price. Call 1300 880 008 to chat with us and learn more about what we can do for you or get the new car buying process started today.