Hyundai has topped its refreshed Kona range with a new, dedicated N-Line model. Is there substance beneath its sporty veneer?

For 2021, Hyundai has given its Kona small SUV a makeover. Not only has the car changed, but also the model hierarchy, too. 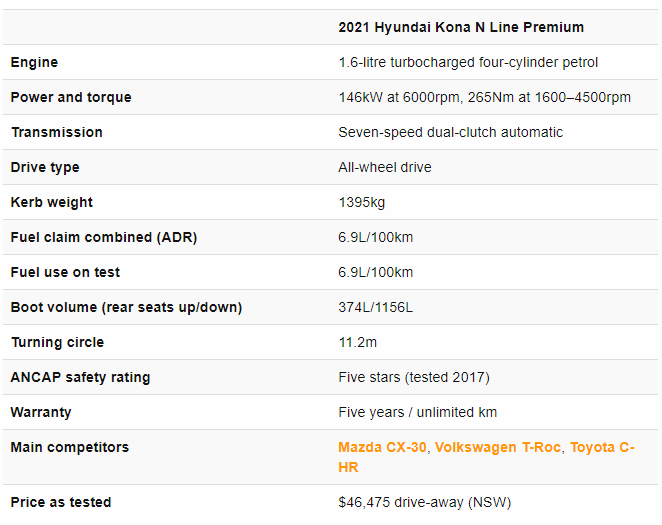 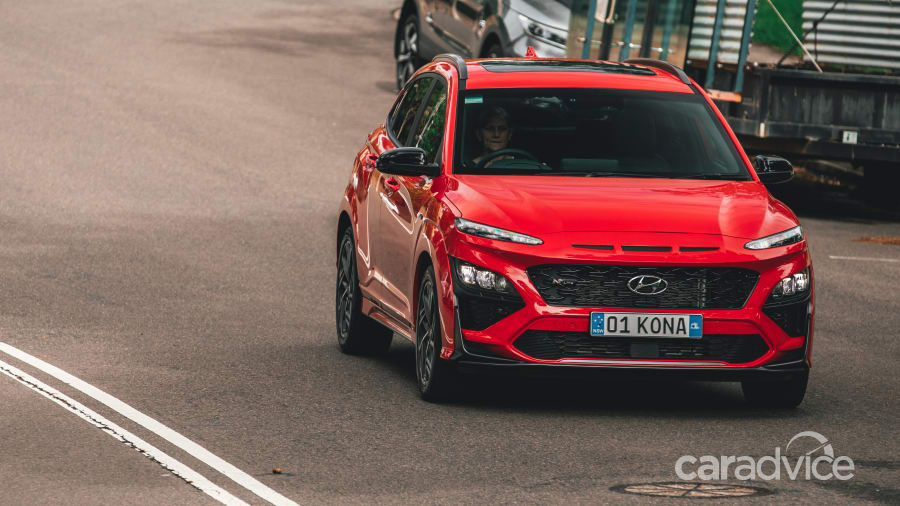 Our test car features no options, and its 'Ignite Flame' solid red paint is also $0. The other no-cost paint is a solid blue, and there are four metallic hues on offer, each for $595 extra.

As a mid-$40K small SUV, you expect some kerb appeal for your money. The N Line performance bodykit does bring an element of aggression to the Kona's already overt styling, and features a completely new front end, side skirts and rear bumper. Another big gesture over the regular car is the body-colouring of all the usual black plastic cladding, which helps morph the Kona away from empty-nester SUV and to something more youthful and inspiring.

A contrasting black roof is available as a no-cost option; however, its introduction does cost you a sunroof. Our test car's red paint is one of the more striking red hues available across the wider market, and continually drew the attention of many passers-by. Hyundai has upped the visual presence of its Kona enough to feel like a $40,000 car.

Inside, trinkets are aplenty. Hyundai refers to the leather seats in the Kona N Line Premium as "sports", but they're more sports-inspired. Bolstering is not deep, but they are comfortable and supportive enough. Each is decorated with a combination of red piping, red stitching, and a neat Hyundai N logo. The driver and passenger side are both electrically adjustable and feature heating and cooling.

Infotainment is sorted by a new 10.25-inch infotainment system, with native navigation, wired Apple CarPlay and Android Auto, and DAB+ radio. The mention of wired connectivity is because the entry- and mid-level Konas offer wireless capability with their 8.0-inch systems. Don't stress, however, as in our launch review, we found the wireless system to continually drop out and make the technology unusable.

That aside, the graphics and usability of the newer widescreen system are top-shelf. The screensaver setting with ambient background navigation is a lovely touch, as is the full-screen integration of smartphone mirroring systems like Apple CarPlay. Audio is handled by an eight-speaker Harman Kardon stereo with external amplifier. It handled a wide gamut of music well, but lacks punch from its centre, dashboard-mounted speaker. Fixing that issue alone would elevate the audio experience significantly.

Lastly in terms of shiny new things, Hyundai has finally gotten on board the digital instrument cluster train. Offered exclusively on the N Line Premium and Highlander models, the 10.25-inch digital instrument panel sports various themes that adjust according to the drive mode selected.

Its graphics are sharp and response rate decent, but it does lack the clever levels of customisation found in Volkswagen Group's trailblazing virtual cockpit systems. Shade thrown, it does lift the perceived quality of the cabin, and this reviewer is glad to see legibility of driver information increased, too.

As mentioned, all cars come with an opening sunroof as standard, unless you decide on a contrasting roof. Front-seat occupant space is good, and storage decent, too. Two large cupholders can be found in the centre console, alongside a neat, rectangular cubby and decently sized armrest storage. Front door pockets are generous and will house a one-litre Camelbak bottle. 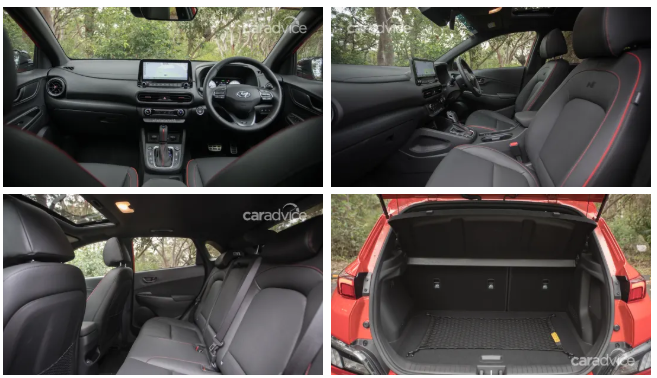 In the second row, space is lacking. At 183cm, I found that sitting behind my own driving position resulted in my knees just grazing the first-row seat backs. Another point is that its roof line tapers significantly toward the rear of the car, which encroached on head room. Width is the Kona's worst enemy, and three younger children would about fit. Have growing teenagers? You'd want to step up to a Tucson.

The issue of width became noticeable when installing a convertible booster seat. An Infasecure Rally, a common and safe support seat used by many parents across Australia, will foul up against the head lining when installed in a Kona. You won't notice this issue using a convertible rearward- and forward-facing seat, however, as they tend to be shorter and narrower.

With a seat of that type installed in a rearward-facing fashion, the front passenger does lose leg room. In a forward-facing fashion, front passenger space remains fair. Interestingly, both a Ford Puma and Skoda Scala – one of which is from the class below – are packaged better as to provide greater second-row space. It proves that exterior dimensions can sometimes be misleading, and it's up to the efforts of clever engineers to create internal space.

Boot space is above average at 374L. More than what the Subaru XV offers, but less than what's found in Volkswagen's T-Roc or Peugeot's 2008. Its dimensions mean a stroller will have issues slotting in up against the seat backs; however, this is an issue common to a few from this segment. With the stroller loaded, a week's worth of shopping and a small handbag can both be accommodated.

On to the drive. As a performance-oriented model, the Kona N Line Premium is beholden to the notion of being fun to drive and somewhat quick. The turbocharged mill produces a total of 146kW – 16kW more than the outgoing engine.

Torque is the same as before at 265Nm. The difference between the old and the new will be unnoticeable to most, but under the microscope, the new car does feel stronger up top. Compared to the Veloster Turbo, which has 4kW more and lugs around 45kg less, the Kona N Line Premium's performance feels slightly blunt. Ideally, given the way it looks, and how it's also emblazoned with N badges head to toe, a power-to-weight ratio similar to the Veloster's would be ideal.

Over the course of the loan, fuel usage initially sat at around 7.8L/100km. A run to Canberra and back yielded 6.9L/100km, matching the official combined claim. Based on that performance, expect a Kona N Line Premium to be thirstier around town than the figures state.

The dual-clutch transmission has its flaws. It likes to hang in second gear during episodes of stop-start traffic, at speeds as low as 5km/h. Upon applying throttle, you're met with a slight shuddering sensation as the clutch tries to grapple with the load.

It's also quite prone to general low-speed jerkiness and hesitation, and takes a mindful, careful foot in order to extract the most from it. All dual-clutches feature similar traits, but the Kona's felt more troubled to unwise inputs than others. On the move, and in regular scenarios, it remains a decent partner to the engine. The spread of seven speeds is handy and makes quick bursts of acceleration simple enough to access. Think motorway on-ramps or the honest mistake of jumping into a lane that closes ahead. 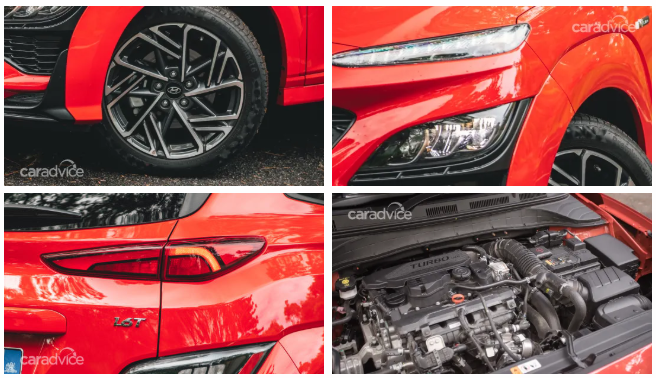 Ride quality is firm, but an honest interpretation of SUV sports. Around town it's not brittle, nor does it run out of suspension length over bigger road imperfections, which are usually the two biggest problems with warmed-up SUVs. Out on faster sections of road, it'll entertain with a flat composure and quality high-speed bump absorption that does not interfere with steering efforts.

It's surprising how well the Kona N Line Premium responds when hustled. The Continental tyres help build confidence with excellent bite, and the car has clearly been tuned to take advantage of what they have to offer. For something that suggests face value is where performance stops, there's quite the well of ability to tap into.

Driver and occupant safety on the move are well catered for. Hyundai's 'SmartSense' technology package is fitted as standard, which includes blind-spot monitoring, camera- and radar-based autonomous emergency braking with pedestrian and cyclist detection, lane-keeping assist, rear cross-traffic alert with emergency braking, adaptive cruise control, as just some. The lane-keeping assist function can be intrusive, and did once or twice mistake road repairs for road lines.

The refresh sees an overall decent topper land on top the Hyundai Kona range. While engine performance is satisfactory, the dual-clutch transmission does have its low-speed woes. If you're planning on test driving, make sure you trial a route with some stop-start traffic to get a feel for its behaviour. Also, don't be shy to bring your parental paraphernalia, too, if you're expecting, as second-row space can be tight. 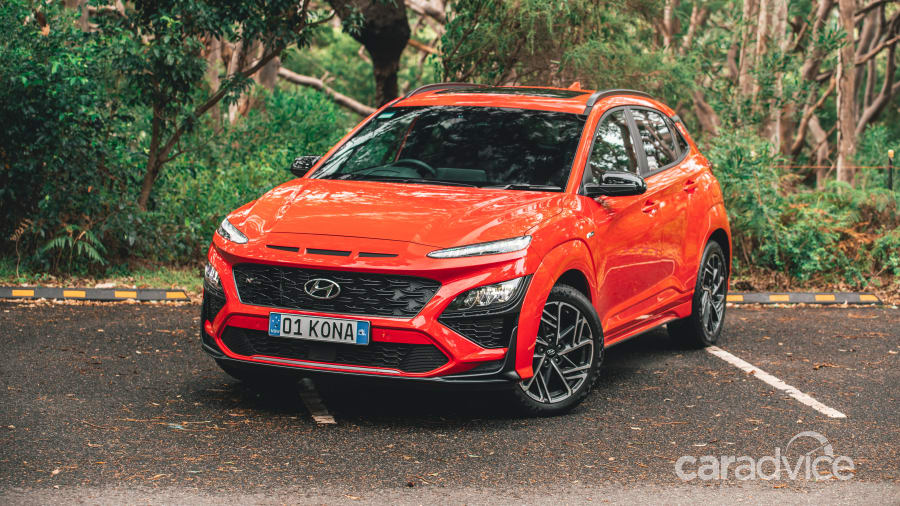 However, its N Line trimmings make it feel more dedicated than previous interactions, and worth the four to five grand step-up over a garden-variety Kona. That's before you consider that its underpinnings are significantly altered as part of the step-up, and that plenty of unique componentry has been thrown in too.

Most importantly, it's fun to drive and fun to look at, which will both appeal to your more youthful side. 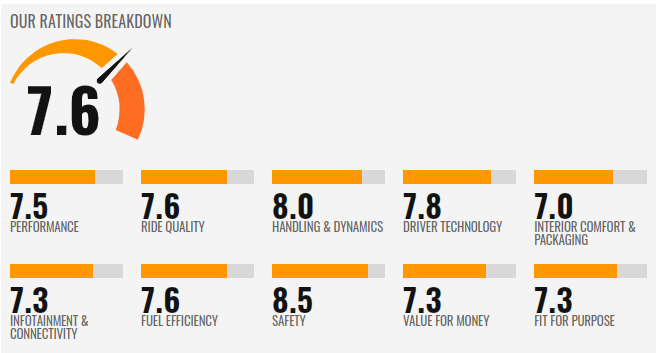 This article has been republished with approval from its original source and author at caradvice.com.au.

Let us help you upgrade and get driving sooner

Ready to trade in your current car and upgrade to something new? Either way, we're here to help.

We’ve redefined the car buying process to make it simple, stress and haggle free. We'll find you a great deal from our Australia wide dealer network to ensure you get a competitive price.

Call 1300 880 008 to chat with us and learn more about what we can do for you or get the new car buying process started today.